In 2017, Johnson & Associates created an infrastructure analysis for the City of Norman. The need for this report arose from a project the City of Norman began in 2013 to identify their urban core and draft a regulating plan that would guide future development. This project was called The Norman Center City Form-Based Code (CCFBC). The CCFBC created a regulating plan to increase density and accessibility in the core of Norman. The boundaries span from Boyd Street to Main Street and from Flood Avenue to the Railroad tracks on the east. Within these 51 city blocks, it is anticipated that the complexion of the neighborhood will move from single-family detached, to a mix of single-family detached, townhomes, condos, apartments, and other high density uses. To plan for the increased density, a study of the area’s existing infrastructure (i.e. streets, water, and sewer systems) was needed, and Johnson & Associates was selected to undertake this analysis. Johnson & Associates created a report that assumed a complete reconstruction/upgrade of all noted infrastructure and the addition of landscaping for improved streetscapes. To do so, roadways, alleys, water lines, sidewalks, and landscaping would be removed and replaced with one cohesive design, as depicted in the CCFBC. Existing and adopted City of Norman reports were also studied in the preparation of the report. Reports included: the City of Norman Wayfinding Plan (2013), the City of Norman Stormwater Master Plan (2011), and the City of Norman 2025 Comprehensive Land Use and Transportation Plan (2004).
In order to complete this detailed analysis in the short time frame available, our team moved quickly to set up meetings and begin data collection. The data collection stage involved collaboration between Johnson & Associates, the Center for Economic Development Law, the City of Norman, and private utility companies. The key pieces of information that were needed to undertake this study included right-of-way widths, street widths, city utility information (water, sanitary sewer, and storm sewer), and private utility companies’ infrastructure (electric, gas, and cable). Comprehensive GIS information was placed into a master file and video footage of the area was taken for quick and detailed reference. After field measurements to confirm street widths, our team was able to compile all of this data into one map and begin breaking down this large area into smaller, more manageable sectors. These sectors will allow the City to easily identify existing infrastructure and its capacities during predevelopment meetings with developers and when undertaking a street reconstruction project. This map and report delineates the city streets and their appropriate street section, as defined in the CCFBC. The exhibits provided to the City of Norman allow them to estimate the cost of the streetscape improvements and utility replacement in any given sector, which includes landscaping, irrigation, street lighting, and sidewalks (including intersection improvements). Intersection improvements include signage/wayfinding, striping, and ADA accessibility. 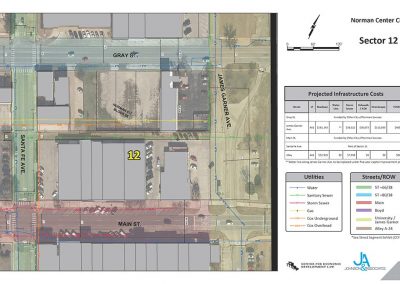 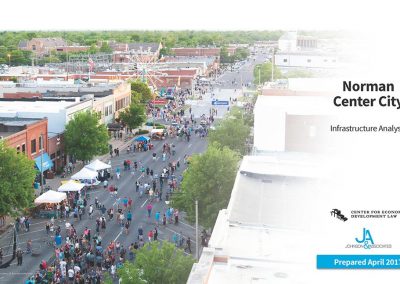 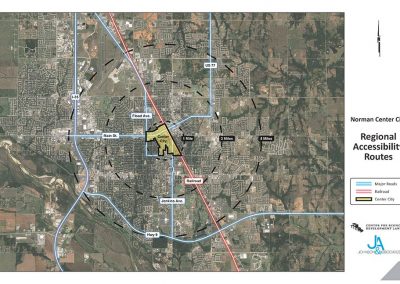 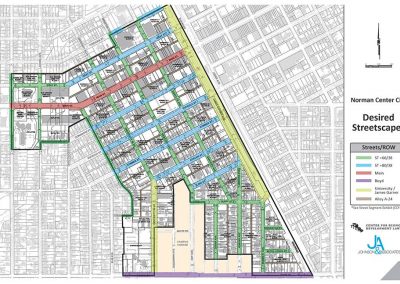 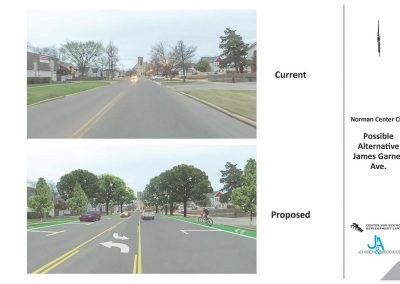